Finding her passion within IT

Originally, she dreamed of a career within arts and becoming a fullstack developer wasn’t exactly planned. Today, Katalina has worked with software development for over six years while raising two daughters together with her husband, participating in bikini fitness competition and focusing on her other various hobbies.

We are proud and feel inspired to have her as our colleague at Crowd Collective. Get to know her story better. 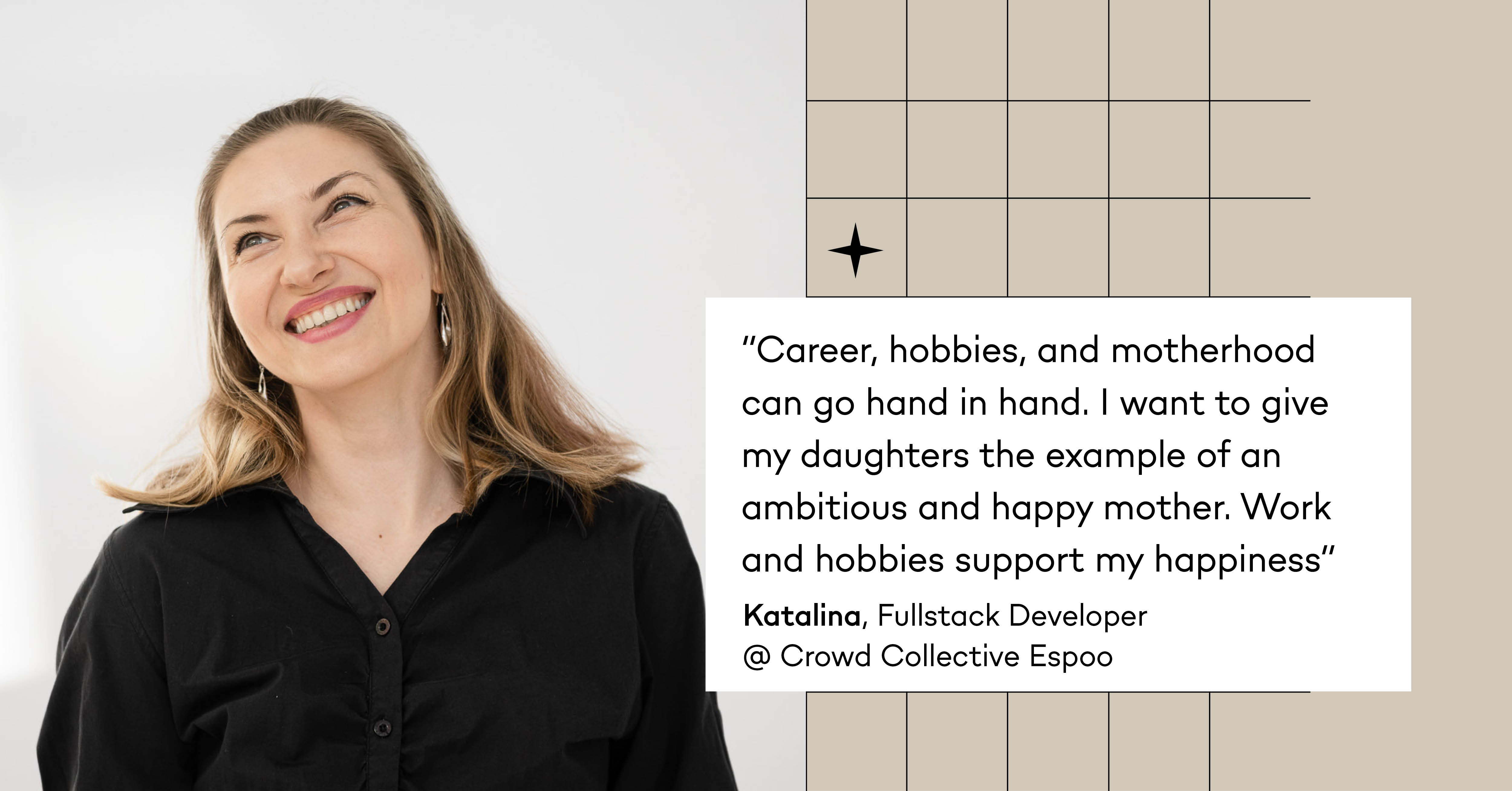 Computer games have been a part of Katalina's life since childhood. Over the years, World of Warcraft won Katalina’s heart in more ways than one. She met her husband through WoW and moved to Finland to start a new phase in life with him.

From irregular shifts at gas stations to finding her passion

After her move, Katalina started studying the local language immediately. She got a temporary job, but ambitious Katalina knew that irregular shifts at gas stations and kindergartens would not be rewarding enough for her.

When searching for new career opportunities, she came across a study program in English called BITE. It was a program that combined business and computer science into one study unit.

"At first the studies felt challenging because it seemed like my classmates had much more previous knowledge about software development. But after six months something clicked and suddenly, I found myself to be best in class," she reminisces.

Building a career in the IT industry

Close to graduation, she got a job offer to work as a developer. From there she continued to a small six-person consulting house to work as a Team Leader and Designer.

Katalina enjoyed the company for a few years until Maiju, our recruiter at Crowd Collective, contacted her to discuss a new opportunity for a fullstack developer like Katalina.

“I appreciate that employees are seen and encountered primarily as people. I also consider investments in the wellbeing of employees and overall work-life balance important,” Katalina explains her decision to join Crowd Collective.

No need to choose between motherhood, career and hobbies

During 14 years of marriage, Katalina’s and her husband’s family has grown with two daughters, a dog and two cats.

“Career, hobbies, and motherhood can go hand in hand. I want to give my daughters the example of an ambitious and happy mother. Work and hobbies support my happiness,” says Katalina.

Katalina has heard debates about the negative aspects of working as an IT Consultant, such as long working hours and money being the driving force of decision making within consulting companies. However, she has no personal experience with either of these claims.

“Personally, I have always chosen my employer based on how they treat their people and face their challenges. I believe that this has contributed to how effortless it has been to maintain a good overall balance in life,” says Katalina.

"I’m not good at math" is a poor excuse

Katalina would love to see more women entering the IT industry. “I’m not good at math” is a common excuse she hears but does not agree with at all.

“You do not need to be mathematically savvy to excel as a developer. Logical reasoning and mathematical talent are two different things, the first of which is significantly more important in this job," she highlights.

“I’m not great at math either, yet look at where I am,” she concludes with a subtle twinkle in her eye.

Looking for your next place to grow? Check out our open positions and join the company where overall life-balance is highly valued.

How to involve more juniors in dev projects?